The U.S. Department of Housing and Urban Development (HUD) allowed continuums of care (CoCs) to request an exception to conduct their homeless count within the last 10 days of February instead of the required timeframe, which is within the last 10 days of January as noted at the bottom of page 34 in the recently released HIC/PIT Count Data Collection Notice. The request for an exception must be for “good cause.” CoC requests for an exception were approved for pandemic-related reasons.

California consists of 44 CoCs (click here to see map). As noted in the table below,

Implications for Next Steps

Homeless Housing, Assistance and Prevention (HHAP) Program funding was allocated based on the pre-pandemic 2019 Point-In-Time (PIT) count. HHAP Round 3 funding totaling $800 million was made available as non-competitive allocations to eligible grantees, which includes CoCs, large cities, and counties. Individual allocations for each eligible grantee were based on their proportionate share of the state’s 2019 homeless population as reported by HUD.

The 2022 PIT Homeless Count will provide an opportunity for the California Interagency Council on Homelessness (ICH) to allocate another $800 million later this year based on homeless count data that will help reveal the current impact of the pandemic on homelessness.

HHAP Round 4 funding was included in AB 140, Committee on Budget, which was approved by the Governor on July 19, 2021.

AB 140, however, states that the ICH “shall make an application for round 4 program allocations available no later than September 30, 2022.”

Also, historically, HUD requires CoCs to submit their homeless count data through its Homelessness Data Exchange by May 1.

The ICH could make a formal request to HUD for just the total unsheltered and sheltered counts for all of the 44 CoCs. However, the request could become wrapped up in some very complicated matters that includes HUD needing time to finalize the Annual Homeless Assessment Report (AHAR), which is the report that HUD provides Congress that

“provides nationwide estimates of homelessness, including information about the demographic characteristics of homeless persons, service use patterns, and the capacity to house homeless persons. The report is based on Homeless Management Information Systems (HMIS) data about persons who experience homelessness during a 12-month period, point-in-time counts of people experiencing homelessness on one day in January, and data about the inventory of shelter and housing available in a community.”

The ICH, however, can ask each of the 44 CoCs for the total number of unsheltered and sheltered persons to determine the total number of persons counted statewide and provide non-competitive HHAP Round 4 allocations to eligible grantees based on their proportionate share of the state’s 2022 homeless population.

CoCs would likely be willing to share their total homeless count numbers with the ICH; however, with one caveat.

As a result, the window of time for the ICH to collect the total number of unsheltered and sheltered persons counted by each CoC will likely be between June and August. During September, all of the 2022 CoC PIT counts can be totaled and appropriate allocations for each of the 44 CoCs, 13 large cities, and 58 counties can then be based on their proportionate share of the state’s total 2022 homeless population before the September 30 deadline.

The ICH has an opportunity to allocate hundreds of millions of dollars of HHAP Round 4 funds later this year based on 2022 PIT count data that will help reveal the current impact of the pandemic on homelessness and not based on PIT count data collected pre-pandemic. 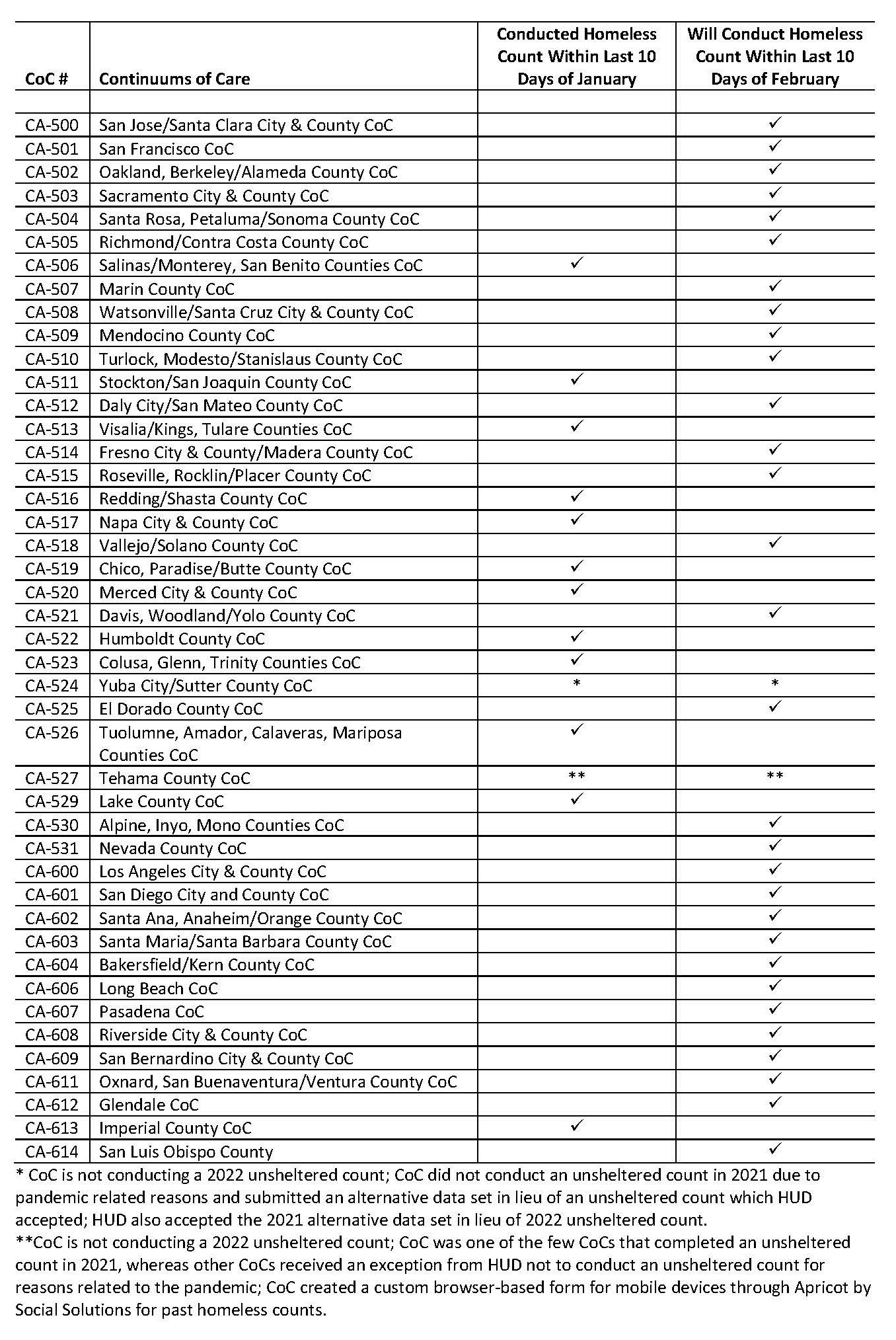