Click here for a pdf copy of this report.

There was a 43% reduction in veteran homelessness in California during the same time.

NOTE: Odd number years were compared because HUD does not require Continuums of Care (CoCs) to conduct unsheltered counts during the end of January in even number years.

Ending homelessness for the number of unsheltered veterans within each of California’s 44 CoCs is less daunting.

As visualized in the map below, during the 2019 unsheltered point-in-time count:

Of the remaining seven (7) CoCs, 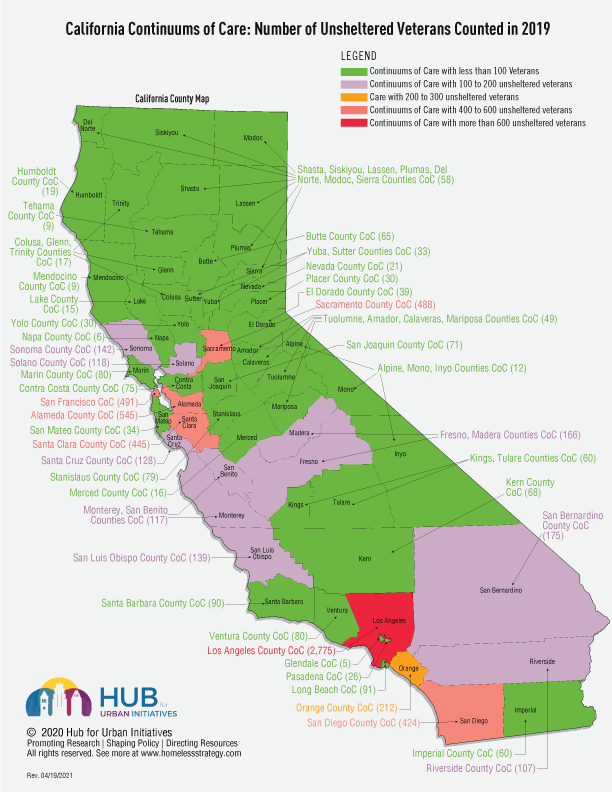 California’s CoCs should echo the announcement of the secretaries of VA and HUD and further the alignment of their joint forces to mobilize their strength to do everything in their power to end homelessness among local unsheltered veterans.

Making it known that they are mobilizing their strength to do everything in their power to end homelessness for each unsheltered veteran in their CoC will likely mobilize more forces and not only make the goal appear feasible but within their reach.

Unprecedented federal and state funding to implement a wide-range of evidence-based, best, promising, and emerging practices ranging from health care to housing to end homelessness for unsheltered veterans in each California CoC will be the focus of the following report in this series.