The Persistence of Chronic Homelessness in California

According to annual Housing Inventory Counts (HIC), the number of PSH beds increased by nearly 15,000 beds as seen in Figure 1. HIC reports provide a snapshot of a continuum of care’s (CoC) inventory of beds and units available on the night designated for a Point-in-Time (PIT) count by program type, which includes PSH.

According to annual PIT counts, the number of chronically homeless persons, however, has increased by almost 10,000 households between 2015 and 2019 as seen in Figure 1 in spite of the increase of 15,000 PSH beds.

Figure 1. Comparison of Total Number of Permanent Supportive Housing Beds and Chronically Homeless Persons between 2015 and 2019. 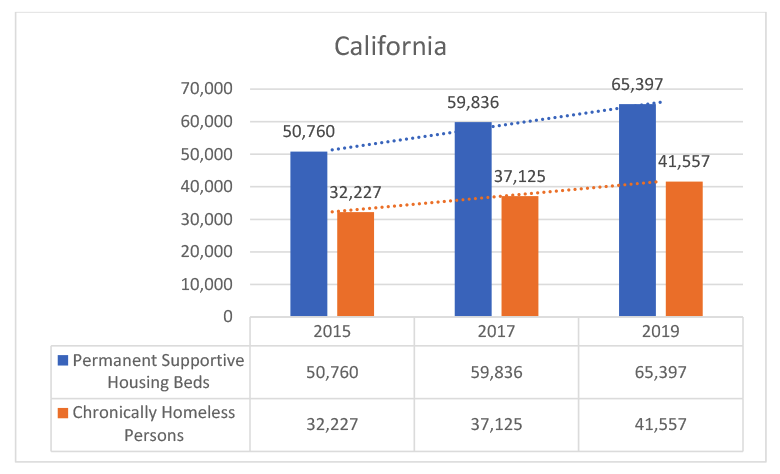 The following map notes the number of chronically homeless persons counted by each CoC in 2019.

The next map notes the number of permanent supportive housing beds reported by each CoC in their 2019 HIC.

Implications for Next Steps

AB-1397 Local planning: housing element: inventory of land for residential development states that “Sites shall be identified as needed to facilitate and encourage the development of a variety of types of housing for all income levels, including multifamily rental housing, factory-built housing, mobilehomes, housing for agricultural employees, supportive housing, single-room occupancy units, emergency shelters, and transitional housing.”

SB-330 Housing Crisis Act of 2019, which requires “a local agency that proposes to disapprove a housing development project (including supportive housing) that complies with applicable, objective general plan and zoning standards and criteria that were in effect at the time the application was deemed to be complete, or to approve it on the condition that it be developed at a lower density, to base its decision upon written findings supported by substantial evidence on the record that specified conditions exist, and places the burden of proof on the local agency to that effect. The act requires a court to impose a fine on a local agency under certain circumstances and requires that the fine be at least $10,000 per housing unit in the housing development project on the date the application was deemed complete.”

SB-744 Planning and zoning: California Environmental Quality Act: permanent supportive housing specifies “that a decision of a public agency to seek funding from, or the department’s awarding of funds pursuant to, the No Place Like Home (NPLH) Program is not a project for purposes of CEQA.” The NPLH Program dedicates up to $2 billion in bond proceeds to invest in the development of permanent supportive housing.

The legislation requires that $1,800,000,000 be awarded in at least 4 rounds. Department of Housing and Community Development (HCD) announced the availability of approximately $400 million in Round 1 Competitive Allocation funds for the NPLH program. Awards were recently announced that included funding for more than 800 permanent supportive housing units. Applications for round 2 were due January 8, 2020 and awards are scheduled to be announced in June 2020.

Housing for a Healthy California Program was created in order to provide grants to counties for permanent supportive housing for individuals who are recipients of or eligible for health care provided through the California Department of Health Care Services, Medi-Cal program.

A 2019 NOFA for Housing for a Healthy California Program Article I – National Housing Trust Fund Allocation Funds was released in May, 2019 by HCD that made approximately $33 million in National Housing Trust Fund (NHTF) Allocation funds for the Housing for a Healthy California (HHC) program. Applications were due August 13, 2019. Awards will be made by the end of 2019.

A NOFA for an additional $33 million is scheduled to be released in February, 2020 and applications will be due by May, 2020. Target Population will be persons who are “Chronically homeless or is Homeless and a High-cost health user upon initial eligibility, is a MediCal beneficiary, is eligible for Supplemental Security Income, is eligible to receive services under a program providing services promoting housing stability, and is likely to improve his or her health conditions with Supportive housing.”

Permanent Local Housing Allocation Program was created in order to help cities and counties implement plans to increase the affordable housing stock including permanent supportive housing. Approximately $165 million in allocations will soon be available. The NOFA regarding the formula allocation for entitlement local governments, which was initially scheduled for release in September, is scheduled to be released in February and applications are scheduled to be submitted over-the-counter between April and June.. A competitive NOFA restricted to non-entitlement local governments will be released several months after the formula allocation NOFA. Applicants will likely have 3+ months to prepare applications.

Multifamily Housing Program provides funds to be used for permanent financing for affordable multifamily rental and transitional new construction, acquisition, rehabilitation, and conversion housing developments. Eligible applicants include local public entities, for-profit and nonprofit corporations, and limited partnerships in which an eligible applicant or an affiliate of an applicant is a general partner. Applicants or their principals must have successfully developed at least one affordable housing project.

HCD announced the availability of approximately $250 million in funding in a NOFA, which was released in June, 2019. Applications were due in August, 2019 and award announcements are expected in December, 2019.

Supportive Housing Multifamily Housing Program (SHMHP) was created out of the Multifamily Housing Program (MHP). “Eligible use of funds may include, but are not limited to, real property acquisition, refinancing to retain affordable rents, necessary on-site and off-site improvements, reasonable fees and consulting costs, capitalized reserves, facilities for childcare, after-school care, and social service facilities integrally linked to the restricted supportive housing units. Also, eligible projects “must have a minimum of five supportive housing units, or a minimum of 40 percent of total units must be supportive housing units, whichever is greater, and must have associated supportive services for the intended target population living in the restricted units, pursuant to Health and Safety Code Section 50675.14.”
HCD will not release another set aside for the SHMHP. However, applications including permanent supportive housing projects may be submitted during the next rounds of funding for the Multifamily Housing Program (MHP), which is noted above.